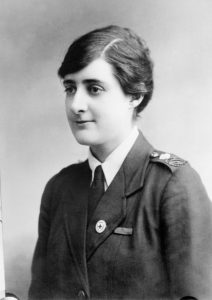 Vera Deakin, daughter of Alfred Deakin, was integral to the operation of the international Missing and Wounded Enquiry Bureau. Image courtesy of Australian War Memorial.

The project casts an eye on the stories of some remarkable women and men of the First World War who tried to help families seeking knowledge and reassurance about the dead and the missing.

The unprecedented death toll of the First World War generated a mass of grief.

Particularly heartbreaking was the vast number of dead who were “missing” – their bodies never found.

In 1915 the newly formed Australian Red Cross Society set up a volunteer network of Information Bureaus to help families of the missing discover what had happened to their loved ones.

Vera Deakin was not the only remarkable woman to volunteer for the Red Cross in WW1. She worked alongside men and women both in the field and back in Australia, collecting information for families desperate for news.

Sadly, soldiers reported as missing in WW1 were usually dead.

After the war the Army took on the massive task of locating all the dead bodies and consolidating them into cemeteries. 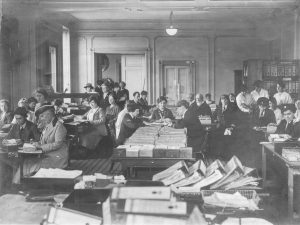 For three years Australian volunteer ex-servicemen and new army recruits laboured on the now-silent battlefields consolidating burial sites into newly created cemeteries and locating missing bodies where they could.

But not all would be found.

To this day, of the 62,000 Australians killed in WW1, around a third have never been recovered.

The ‘Missing’ exhibition provides some of the context of this crisis of the missing, the role of the Red Cross and the Graves Workers and the story of the creation of the Shrine of Remembrance in Melbourne to provide a place for people to mourn.

It also shares personal journeys of people during the war and in its aftermath. It tells the story of: Vera Deakin, determined head of the overseas Wounded and Missing Inquiry Bureau; Winifred Brotherton, dedicated volunteer bureau clerk who travelled from Castlemaine to London to be of use; Stanley Addison, Red Cross ‘searcher’ who looked in hospitals and battlegrounds for missing and wounded soldiers; Emma Tout, grieving mother at home of a son whose body was never found; Frank Cahir, the seasoned Gallipoli veteran who volunteered for extra duty to photograph war graves; and Will McBeath, young army recruit who was too late to fight and instead became a war graves worker, digging up graves and reburying people he knew. 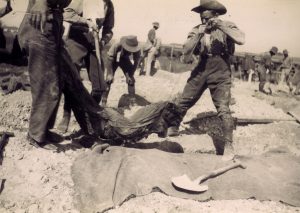 The exhibition is free to watch, show and share online on the portal Victorian Collections. It features a short documentary film and a series of photo essays with some rarely seen historic images from the Victorian RSL and Australian Red Cross Society archives.

The first part of the project, the short documentary film ‘The Missing’ was released in November 2019. It was a finalist in the 2020 Australian Teachers of Media (ATOM) Awards and was screened in festivals around Australia and overseas, including the Melbourne Documentary Film Festival, Veterans Film Festival and Ogeechee International History Festival. The film is now freely available to watch as part of the digital exhibition. 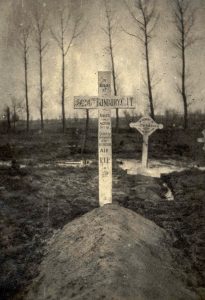 The project’s final component, an education resource kit, is in production and is due to be released in mid 2021.

‘The Missing’ exhibition can be freely viewed online at Victorian Collections: https://victoriancollections.net.au/stories/the-missing

‘Ordinary People in Extraordinary Circumstances’ is supported by the Victorian Government through the Victoria Remembers Major Grants Program.

The Missing screens in Georgia in the USA as part of the Ogeechee International History Film Festival.