On Friday the 29th November 2019 a select audience joined us for the premiere screening of The Missing.

The typical Melbourne traffic chaos was countered by a beautiful spring day and the tranquil surroundings of the Melbourne Botanical Gardens and the Shrine of Remembrance. 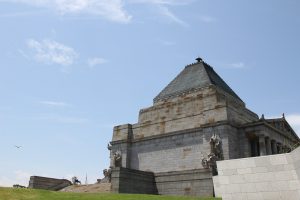 The Shrine of Remembrance, Melbourne. Photo by Kathie Mayer.

In the Shrine’s auditorium, an intimate small theatre decorated with crimson peace cranes, Naias Mingo Director of Visitor Experience at the Shrine of Remembrance welcomed us to the space, acknowledging country and reciting the Ode. Wind & Sky Productions’ Director/producer Jary Nemo introduced the film, and then we saw the film for the first time on the big screen – a beautiful, moving, thoughtful 11 minute journey into grief and commitment and the aftermath of WW1.

Following the screening came an interactive discussion session with panellists Associate Professor Fred Cahir, Professor Melanie Oppenheimer, Dr Bart Ziino and Carole Woods. The conversation was moderated by the film’s producer Lucinda Horrocks. It was a lively session and an opportunity to delve deeper into some of the information behind the film. It gave the audience a chance to explore the motivations of the volunteers of the Red Cross Wounded and Missing Enquiry Bureau and the Australian Graves Detachment, and to find out more about some individual stories, in particular the powerful story of Vera Deakin. 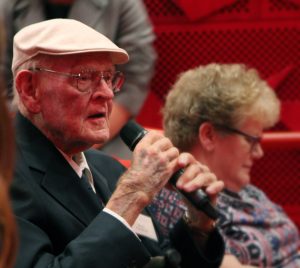 If enthusiasm for questions is any measure to go by, the audience was fascinated. Joining the audience were some significant people: Vera Deakin’s daughter Judith Harley and her family; Patrick Cahir, son of WW1 Graves Detachment worker Frank Cahir and his family; and Norma Harrison daughter of Graves Detachment Worker William Frampton McBeath, and her daughter. They shared their perspectives with the audience and it was an honour that they joined us.

To end the event Associate Professor Richard Chew took to the stage and performed one of his compositions featured in the film, a lyrical, liquid, heartbreaking piece written in honour of Richard’s own great uncle, who died on the Somme.

It felt as if time had stood still. 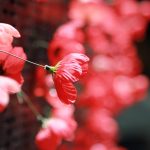 Poppies at the entrance. Photo by Kathie Mayer.

And then we emerged back into the beautiful Spring day surrounded by gardens and distant traffic chaos, having thought a little about death, grief and commitment, recharged and ready to join the world.

The unprecedented death toll of the First World War generated a burden of grief. Particularly disturbing was the vast number of dead who were “missing” – their bodies never found. This short documentary explores two unsung humanitarian responses to the crisis of the missing of World War 1 – the Red Cross Wounded and Missing Enquiry Bureau and the post-war work of the Australian Graves Detachment and Graves Services. It tells of a remarkable group of men and women, ordinary people in extraordinary circumstances, who laboured to provide comfort and connection to grieving families in distant Australia.

Professor Melanie Oppenheimer is the Chair of History at Flinders University. Her research interests include the role of voluntary organisations and patriotic funds in times of peace and war; the history of volunteering and voluntary action; and gender and imperialism. Melanie has published extensively on the First World War and its aftermath and is the author of the centenary history of Australian Red Cross, The Power of Humanity. 100 Years of Australian Red Cross, published in 2014.

Associate Professor Fred Cahir specialises in Victorian Aboriginal History at Federation University Australia. His extensive publications range in scope from archaeology to zoology. His family history inspired his most recent book ‘Devoted labour for the lost, the unknown but not forgotten dead’: The Australian War Graves Workers 1918-1922. Fred is the academic Chief Investigator of the Ordinary People in Extraordinary Circumstance film and digital gallery project.

Dr Bart Ziino is senior lecturer in history at Deakin University. Bart is an historian of Australian experiences of the First World War, and has published widely on memory and commemoration of war in Australia and abroad. His book A Distant Grief: Australians, War Graves and the Great War (2007) brings to light the painful efforts of Australian families to grieve for loved ones whose bodies remained on foreign battlefields after the First World War.

Carole Woods MA, FRHSV, is the Hon. Secretary of the Royal Historical Society of Victoria. Her publications include Beechworth: A Titan’s Field, and Vision Fugitive: The Story of David Allen, with a Foreword by Joan Sutherland. She has curated two major exhibitions on the Australian Red Cross at RHSV including ‘Vera Deakin’s World of Humanity’. The RHSV will publish her biography of Vera Deakin: A Red Cross Leader in 2020.

Lucinda Horrocks is a producer, writer and co-founder of Wind & Sky Productions, an independent film company specialising in documentary storytelling. She has produced over 30 short films, including the award-winning Many Roads (2017), Seeing the Land from an Aboriginal Canoe (2015), and Savoy Ladies Group (2014). She produced and wrote the short documentary The Missing (2019) with partner Jary Nemo (director, writer, producer).

Associate Professor Richard Chew is Director of the Arts Academy, Federation University and composer for The Missing. He has composed for Welsh National Opera, English National Opera, South Bank Centre London, Adelaide Festival, Vienna Festival and Channel 4 Television and his music for theatre has been performed in London, Birmingham and New York. In 2018 he conducted his opera Stari Most in London for George Clooney and John Prendergast’s human rights charity The Sentry.

Jary Nemo Jary Nemo is director, producer and co-founder of Wind & Sky Productions. He has worked in the media industry for four decades. Based in Australia he has worked across multiple disciplines throughout an eclectic career. His award winning work has screened internationally in cinemas, on broadcast television, at institutions, in museums, galleries and at local and international film festivals.

The Missing is freely available to watch, show and share at The Missing

The film ‘The Missing’ is the first output of the ‘Ordinary People in Extraordinary Circumstances’ film and digital gallery project, which is supported by the Victorian Government and is a project partnership of Federation University Australia, Wind & Sky Productions, Australian Red Cross and RSL Ballarat.