Lucinda Horrocks is a producer, writer and co-founder of Wind & Sky Productions.

Early in her career she started out as a market research analyst in quantitative and qualitative social research, designing and delivering research projects. She then worked on academic projects in social and political science and gender relations. These foundations have brought a distinctive style to her work which is based on questioning, listening and subject-centred approaches to documentary narrative and a story development framework based on research process. Based in Ballarat in regional Victoria she collaborates largely with her partner Jary Nemo on short documentary stories and digital exhibitions.

She is drawn to issues which engender social responsibility and foster positive change. Her work with Wind & Sky is characterised by an acceptance of complexity and exploration of traditional documentary narrative within the new forms of digital storytelling. Recent stories include Out of the Closets, Into the Streets, about the 1970s Melbourne Gay Liberation movement which screened at the 2017 St Kilda Film Festival and 2017 Melbourne Queer Film Festival ; the MAGNA (2016) award winning Seeing the Land from an Aboriginal Canoe, about the unacknowledged contribution of Aboriginal Victorians on colonial waterways; Exile, a musical multimedia tour celebrating the Irish experience in Australia; and Memories of War, a collaborative film and research project about the impacts of WW1 on a regional town. Her work is distributed online, has toured international festivals, is screened at dedicated screenings and events and is on permanent display at museums and cultural institutions.

Lucinda is an Adjunct Research Fellow at Federation University Australia.

Our people make our company what it is. Without them, there would be no stories. We treasure them for their talents and enthusiasm and willingness to collaborate. 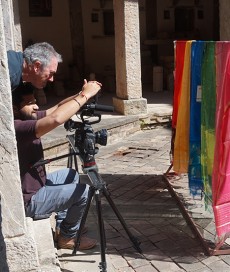