Many Roads: Chinese on the Goldfields

Media Release: Chinese in Victoria took many roads to fortune

Museum of Australian Democracy at Eureka 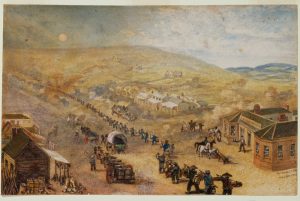 Chinese people took many roads to get to the goldfields of Victoria in the 1850s. Image: Samuel Charles Brees, Flemington Melbourne, watercolour, ca 1856, courtesy of State Library of Victoria. 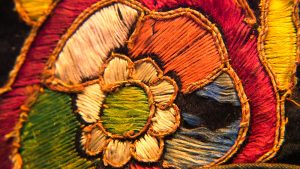 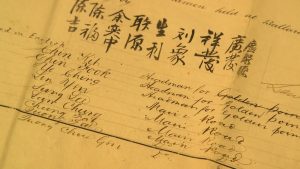 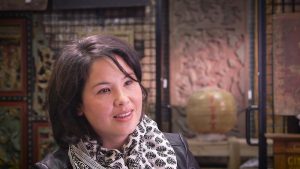 The digital exhibition features video and audio interviews with historians and experts such as Anna Kyi, historian. Image by Jary Nemo. 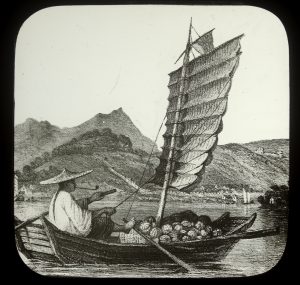 In the 1850s tens of thousands of Chinese people flocked to Victoria, joining people from around the world who came here chasing the lure of gold. Fleeing violence, famine and poverty in their homeland they sought fortune for their families in the place they called ‘New Gold Mountain’. Facing discrimination and injustice they carved out lives in this strange new land.

The Chinese took many roads to the goldfields. They left markers, gardens, wells and place names, some which still remain in the landscape today. At the peak migration point of the late 1850s the Chinese made up one in five of the male population in fabled gold mining towns of Victoria such as Ballarat, Bendigo, Castlemaine, Beechworth and Ararat. It was not just miners who took the perilous journey. Doctors, gardeners, artisans and business people voyaged here and contributed to Victoria’s economy, health and cultural life.

The all-digital project features an eleven minute film featuring curators, historians and Chinese Victorian descendants, two extended audio interviews and one extended video interview with key experts, a digital gallery featuring a hundred images of artefacts, documents, photographs and illustrations from museums, galleries and historical societies, and six essays written by Victorian historical experts. The story canvasses the discrimination the Chinese faced and the famous overland treks the Chinese were forced to take to get to Victoria, but also the various positive ways the Chinese contributed to the economy and culture of Victoria.

All items in the digital exhibition are free to watch, show and share from the link https://cv.vic.gov.au/stories/immigrants-and-emigrants/many-roads-stories-of-the-chinese-on-the-goldfields-of-victoria/ .

The story’s 11 minute documentary film explores the story of Chinese people in the Victorian gold rush, uncovering the routes the Chinese took to seek gold, the lives they lived and the sort of people they were.

An extended video feature includes a full interview with historian Anna Kyi on attitudes towards Chinese migration from the 19th century to the present, harmony and conflict on the goldfields and the complexity of the Eureka story.