Wind & Sky’s film Out of the Closets, Into the Streets will be screening at the Nova Cinema in Carlton on the 23rd May 2021 as part of a delayed in-cinema program of the 2020 Melbourne Documentary Film Festival. 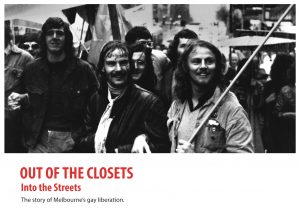 We were proud to have three films accepted into the Melbourne Documentary Film Festival in 2020, however COVID-19 put a pause to the festival being able to screen films in-cinema in-person.

Instead, our films were shown in the first fully virtual international documentary festival in July 2020.

Since then the MDFF team has been doing herculean work behind the scenes and has arranged a number of monthly screenings of its 2020 films at the Cinema Nova, Carlton.

So on Sunday 23 May 2021 at 10:45am Out of the Closets will be screening as part of the Melbourne Shorts Session 1 presented by the Melbourne Documentary Film Festival.

More about Out of the Closets, Into the Streets: http://windsky.com.au/out-of-the-closets/