The culmination of two years’ work was celebrated in the launch of the film ‘The Last Goodbye’ at the Museum of Australian Democracy at Eureka on Sunday the 8th November.

Shown to a full audience in the intimate hemispherical M.A.D.E theatre, the 18 minute documentary explored the meaning of World War One and remembrance for Ballarat. “It was beautiful,” said one audience member. “Very moving,” said another. “I had a tear in my eye by the end of it and I saw other people did too.”

View a photographic gallery of the event. 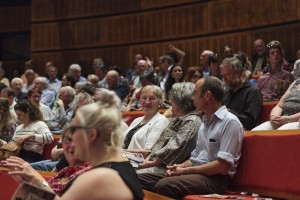 The audience waits for the film to begin. Photograph by Aldona Kmiec.

The film was a compilation of interviews with four young people who had researched, in various ways, the impact of the Great War, interspersed with readings performed by Graduate Actors of the Arts Academy, chosen by the performers themselves from texts provided by Ballarat-based historians. The live voices were complemented by a selection of historical photographs from local and international archival collections and with music of the WW1 era performed by the Graduating Actors of the Arts Academy.

“It was excellent. It avoided the old stale jingoistic debates,” said project collaborator Dr David Waldron who had not seen the film before the launch. “It was grounded in the actual experience of Ballarat people and said something new.”

“What I like about the film is that it fits so much in, but you don’t realise it because it is simply told,” said producer Lucinda Horrocks, “the narrative holds you, you just keep watching.” 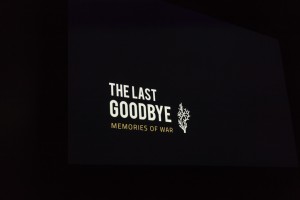 “Thanks for making me cry again, Jary and Lucinda,” said Ballarat RSL President Alex Tascas to the film’s producers as she got up to speak following the screening, a teasing reference to the producers’ previous collaboration with the RSL ‘In Memory of Bull Allen’.

Ms Tascas gave an engaging and personal speech which began with her own experiences of Anzac Day. “I never used to go,” she said, “I’m of the Vietnam conflict generation. I was an Army nurse. I never used to march because I didn’t like the way Vietnam vets were treated.” But then, she said, she missed the camaraderie of her Army days and started to attend.

Alex went on to talk about the film, and explained it was part of a larger project collaboration between the RSL Ballarat, Federation University Australia, the Gold Museum, the Museum of Australian Democracy at Eureka and Wind & Sky Productions. She talked about how the project connected university writing, history, drama and education staff and students with the Gold Museum World War One collection and to the project film-makers. But her talk was really a celebration of the efforts of the community in the commemorative year of 2015. For the RSL, she said, this had been an extraordinary year of engagement and connection. 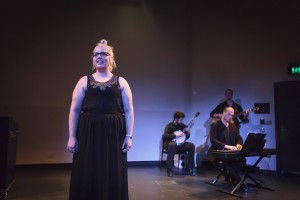 After Alex spoke the audience was treated to an extraordinary live performance. A small band of musicians began to play, and actor Casey Binks, a recent graduate of the Federation University Australia Arts Academy, who has the voice of an angel, walked to centre stage and sang an old World War One song ‘Are We Downhearted, No?’ with a plaintive, contemporary feel. As this beautiful song morphed into another World War One era favourite ‘Hold Your Hand Out Naughty Boy’, a choir joined her with singers from all sides of the theatre chiming in, bathing the audience in sound. These were Graduating Actors of the Arts Academy reprising some of the songs from their 2015 production ‘Oh What a Lovely War’, arranged and directed by Nathan Gilkes and Bryce Ives of Present Tense Ensemble.

“It was superb,” said one audience member. “I had no idea there was going to be singing but it was perfect, a perfect surprise.” For the actors in the ensemble this was their last performance together as students of Federation University Australia in Ballarat. Now at the end of their graduating year, the actors were all dispersing into the next stage of their careers. “It was great, it was like getting the band back together for one last show,” said one performer. 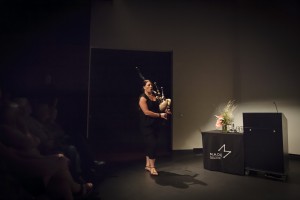 After the song the lights dimmed to full black. Out of the darkness the sound of bagpipes soared. “I had no idea it was coming,” said one audience member. The bagpipes played for a long time in the darkness. “It made me think about soldiers marching off to war.” As the lights went up slowly and the piper Amber Sinclair walked to stage, the audience could see who had been playing. “I was imagining it was a Scottish player, a man, in full regalia,” said an audience member, “to see the player was a young woman, dressed casually in black clothing was an extraordinary moment.”

“How am I going to follow that?” said Jary Nemo, the film producer and project creative director who after the bagpipes ended got up to speak. “I’m here to thank everyone but I’m not going to bore you with thanking individually every one of the cast of hundreds who have collaborated on this project,” he said. Then, “Oh hang on a moment, yes I am” and on the screen rolled a full list of the people who had worked on the film, the event and the ‘Memories of War’ project. As the credits scrolled, the actors came back on stage singing two more songs to the audience and so an incredible two year project ended with a massive round of applause. 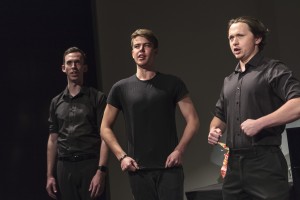 “The whole thing was seamless, the film, the performances, the speeches” said one person from the crowd. “It was so integrated” said another. “Nostalgic, but in a good way” added another member of the crowd. Project collaborator Bryce Ives described the event as a “thought-provoking and grounded community reflection.” “I don’t think Ballarat has seen anything like this before,” said RSL President Alex Tascas.

After the show the audience was invited to the George Hotel – home of the Ballarat RSL – for a complementary drink where they could mingle with project cast and crew. It was a relaxed wind down to an intense and moving show. 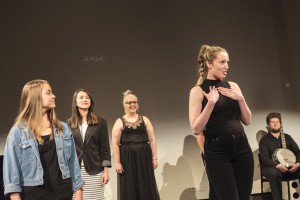 The film ‘The Last Goodbye’ is screening every day in the week of 9-14 November 2015 at 12:30pm at M.A.D.E Ballarat. Entry is free for Ballarat residents.

The Memories of War Film and Research Project was a collaboration between the RSL Ballarat, Federation University Australia, the Gold Museum, the Museum of Australian Democracy at Eureka and Wind & Sky Productions.

As part of the project community members were invited to produce content for the Gold Museum on the topic of ‘Memories of War’. Publication of content began in September 2015 and continues to be published.

The project was funded by the Australian Government Anzac Centenary Local 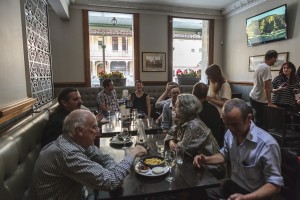 Project cast and crew mingle with the audience in a relaxed afternoon at the George Hotel. Photograph by Aldona Kmeic.

A new online exhibition tells stories of some remarkable women and men of WW1.