We are proud to announce that our short documentary The Missing is screening in the Veterans Film Festival 2020 Virtual Edition from November 30 – December 31.

About the Veterans Film Festival 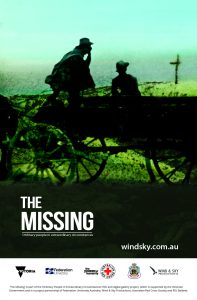 The Veterans Film Festival (VFF) is an annual Australian event dedicated to putting the spotlight on recent work by veterans and filmmakers who explore diverse perspectives on conflict and veterans’ themes.

This is a carefully curated and very competitive festival and we are honoured that The Missing forms part of the screening line up.

The 2020 Festival features a range of full length and short films from Russia, Poland, the US, Italy, the Netherlands, Hungary, Vietnam, Cyprus, Iran, New Zealand, Canada and Israel, which showcase contemporary and historical perspectives on conflict, war and its aftermath.

Due to COVID-19 the 2020 festival is a virtual event. Films can be watched on demand from November 30 to December 31 2020 on a pay per view or festival pass basis.

To view the range of films and purchase tickets visit the 2020 Veterans Film Festival website at https://veteransfilmfestival.com/

The unprecedented death toll of the First World War generated a burden of grief. Particularly disturbing was the vast number of dead who were “missing” – their bodies never found. This short documentary explores two unsung humanitarian responses to the crisis of the missing of World War 1 – the Australian Red Cross Wounded and Missing Enquiry Bureau and the post-war work of the Australian Graves Detachment and Graves Services. It tells of a remarkable group of men and women, ordinary people in extraordinary circumstances, who laboured to provide comfort and connection to grieving families in distant Australia.

The film features Professor Melanie Oppenheimer of Flinders University and Dr Bart Ziino of Deakin University, with original compositions by Dr Richard Chew of Federation University. Not to be missed are rarely seen archival images from the Australian Red Cross Heritage Collection and from Anzac House Victorian RSL headquarters.