The fabric of contemporary Australia is layered with many cultural threads, some of which have greatly shaped our regional and rural histories. Migration in North-East Victoria has transformed the region’s industry and culture, bringing with it a richness and diversity that tells its story through food, wine, festivals, language and the many stories that new and old migrants share. These stories speak of struggle, persistence and community – of the joy of possibility and reward and the hardship and pain of leaving family and friends; of the strength of newfound friendships and of settling in a sometimes-unforgiving environment. They relate the difficulty in learning a foreign language and the growth of unique cultural identities, such as the Italian communities of Myrtleford and the King Valley. 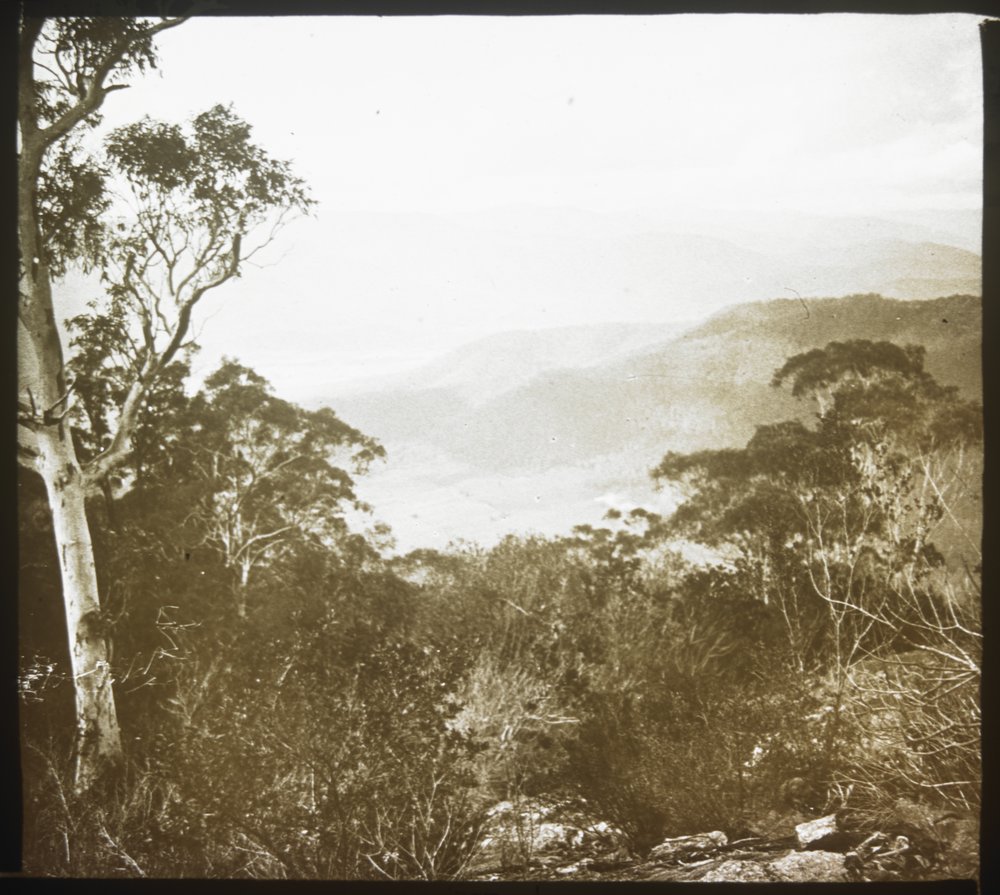 The original inhabitants of the area were the Pangerang, Minjambuta, Duduroa and Jaitmathang (Ya-itma-thang) peoples. View of Mt. Buffalo from Mackay’s Lookout over the Ovens and Buckland Valleys, by John Henry Harvey circa 1855-1938. Source: State Library of Victoria.

The original inhabitants and traditional owners of the area that encompasses the Ovens, King, Buffalo, Kiewa and Mitta Mitta Valleys were the Pangerang, Minjambuta, Duduroa and Jaitmathang (Ya-itma-thang) peoples who spoke the Waywurra, Mogullumibidj and Dhudhuroa languages. These communities were present for tens of thousands of years prior to European settlement and were the first true settlers of the area. Seasonal migration played a role for First Australians, particularly the Minjambuta from the Ovens Valley area, who, in summer, would journey to the cooler airs of the Mt. Buffalo plateau to hunt for the protein rich Bogong moths and engage in feasting and ceremony.

European settlers began to move to the North-East in large numbers after 1824 when Hume and Hovell explored the area seeking new grazing lands. Subsequently, sheep and cattle farming became the region’s major industry.  However, it was the discovery of gold at Beechworth and in the Ovens Valley in the 1850s that spurred a temporary population boom that included thousands of Chinese migrants seeking their fortune.

Predominantly originating from the Guangdong Province, the miners brought their own customs and culture with them. The Chinese encampments contained places of worship, shops, opium dens, and market gardens. However, the arrival of Chinese migrants was not always met with welcome and tensions in the area fuelled a number of incidents, most notably The Buckland Riot of 1857, which occurred when a large number of Europeans violently stormed a Chinese camp. The Victorian Government provided compensation to the miners after the riot and encouraged them to return under the protection of police and an appointed Chinese Protector. Although there was tension instigated by a portion of the community, there were also noted examples of new cross-cultural interactions such as the first celebration of Chinese New Year in the area, which was met with awe and curiosity, with many locals joining in the festivities and sampling new food and music. The Chinese mining community also made financial contributions to the local Hospital and The Beechworth Benevolent Asylum by selling imported costumes, banners and ceremonial weapons. Beechworth’s Chinese Heritage is commemorated today at The Chinese Gardens, The Burning Tower and in a large section of the local cemetery where approximately 2700 Chinese miners are buried. 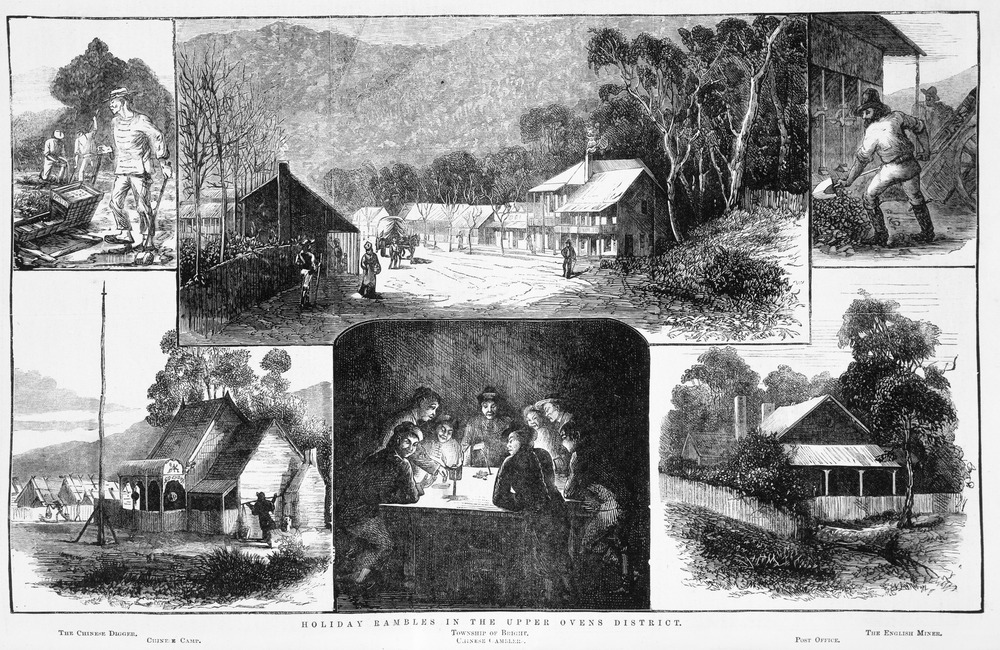 A contemporary view of the ‘Chinese Digger’ compared to ‘the English Miner.’ ‘Holiday Rambles in the Upper Ovens District, Township of Bright’, 1878. Source: The Illustrated Australian News, David and Ebenezer Syme, January 23, 1878. State Library of Victoria.

After the Gold rush, many Chinese migrants returned home. However, a number settled in the area as merchants, market gardeners and, notably, as tobacco and hops farmers both in the Ovens, King and eventually Buffalo River Valleys, contributing to the establishment of a new industry that would later fuel further migration to the area. With the rise of fascism in Italy and tighter American immigration laws, the 1920s saw an increase in Italian immigration to Australia and the first Italian migrants involved in tobacco cultivation at Gapsted and Eurobin. From 1942 – 1946, a POW camp for Italian soldiers captured by the allies in North Africa was set up in Whorouly and during this time housed over one thousand soldiers. They were repatriated at the end of 1946 but it has been claimed that between 10 – 20% returned to the Ovens Valley area, with many becoming involved in the tobacco and agricultural industries.

After the Second World War, the Federal Government launched a new immigration policy to encourage population growth and the North-East experienced a wave of migrants from Europe settling in the area. Between 1947 and 1971 the Bonegilla Reception Centre near Albury-Wodonga received over 300,000 migrants, most of whom were non-British Europeans. The centre was the largest and longest operating post-war reception centre in Australia and provided a temporary place for migrants to be accommodated whilst they were placed in employment and housing. In the beginning most were refugees or displaced citizens. However from 1950, the camp began to receive assisted migrants from Italy, Greece, Hungary, Sweden, Germany, the Netherlands, Britain, Austria, Norway, Finland, Spain, Yugoslavia and Czechoslovakia, who came looking for employment opportunities and a new way of life.

Former residents recall mixed experiences of their time at Bonegilla. The isolated location and new landscape proved frightening for some, whilst others recall the challenging prospect of being placed in employment (which could be anywhere in Australia), and finding housing and social networks outside the centre. Others were relieved to escape war-torn countries and looked forward to new opportunities. Initially, new migrants were expected to work for two years as directed in return for their passage and permission to live in Australia. Their existing qualifications were frequently ignored and the men were sent to work as labourers and the women placed in domestic roles, with families often separated. Bruck Textiles in Wangaratta (still operational today) and The Snowy Mountain Hydro-Electric Scheme were among the employers. 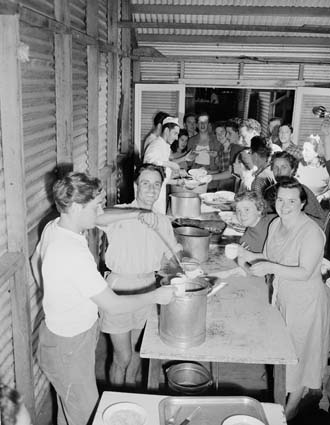 Dining at the Bonegilla Reception Centre, 1949. Migrants collect their meal (rear), and help themselves to tea (foreground), in the dining hall. Source: National Archives of Australia: A12111, 1/1949/22/8.

A large number of migrants were also sent to work locally in other parts of the North-East, including on tobacco farms in the Ovens and King Valleys, where many, particularly Italian migrants, later set up their own operations or became part of share farming co-operatives. By 1971, 14% of the population of Myrtleford was Italian born and a distinct rural community began to take shape – the town even boasted its own Italian cinema, which provided a vital social space for the town’s Italian residents. In the 1970s, as a quota system for the growing and sale of tobacco was being introduced, many Italian families sought to diversify and saw the potential to grow vegetables, nuts and to produce European wine grape varietals. Many established vineyards in the King Valley area, growing grapes for major producers such as Brown Brothers until branching out to produce their own wines. Some of these families, such as the Pizzini’s and Ciccone’s, are still in operation today and produce a number of unique Italian wines that have defined the region on the Australian wine map. The North-East celebrates a number of Italian festivals including La Fiera in Myrtleford and La Dolce Vita in the King Valley and a number of community groups, such as the Savoy Ladies, Italian Pensioner’s, Gruppo Alpini, The Circolo Calebrese and The Circulo Trentinto provide a social and cultural platform for older migrants and second and third generation Italian-Australians.

Today, local councils support the Federal Regional Sponsored Migration Scheme, which aims to aid employers with labor shortages in regional Australia. The North East continues to welcome migrants from all over the world including Sri Lanka, The Philippines, Nepal, and India, adding to the rich history and legacy of migrants past who have made such a lasting contribution to North East Victoria.

The History of The Savoy Ladies Group by Samantha Dinning.

McWaters, Vivienne. Beechworth’s Little Canton: The History of the Spring Creek Chinese Camp and Its Residents, Shire of Indigo, Beechworth, 2002.